Home » What your doctor can do » Cardiac Resynchronisation Therapy (CRT)

What does it do? 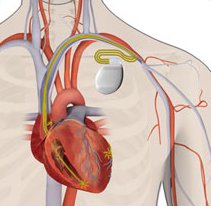 Cardiac resynchronisation therapy (CRT) , sometimes called biventricular pacing, may be helpful if the electrical impulses that control the heart muscle contraction and relaxation do not travel through your heart rapidly and evenly. The left ventricle may contract a fraction of a second after the right ventricle instead of simultaneously. Frequently, sections of the left ventricle show delayed contraction and the device may produce shorter and more uniform contraction. This lack of co-ordination affects the ability of your heart to pump effectively. Your doctor will look for evidence of poor heart muscle co-ordination as provided by an ECG recording or echocardiographic (ultrasound) examination.

CRT not only functions as a pacemaker but it re-coordinates (resynchronises) the beating of the two ventricles by pacing both simultaneously and specifically improving contraction of the left ventricle. This improves the overall efficiency of your heart. CRT therefore differs from typical pacemakers, which only pace the right ventricle and control heart rate. CRT devices may not only improve the symptoms of heart failure but have been shown to prolong long-term survival. Doctors frequently choose to combine a CRT with an ICD in the same device. In this case, the device is termed a CRT-D.

Where does it go and how is it put in place?

Like standard pacemakers, the CRT device is the size of a pocket watch. A CRT device is usually implanted with a local anaesthetic, just under your collarbone with flexible leads (coated wires) coming from it that are positioned in your heart. The procedure usually takes 1-2 hours.

The electrode lead is inserted into a vein at the shoulder or the base of the neck. The cardiologist guides the lead into the correct chamber of the heart, checking its position on an X-ray screen, and secures it in position with a stitch at your shoulder. The lead is then connected to the pacemaker and the pacemaker is fitted into a small ‘pocket’, or space, between the skin and the chest muscle. The amount of electrical energy needed to stimulate the heart to contract is then tested and the pacemaker is adjusted.

After your device has been fitted, you may feel some pain or discomfort and there may be some bruising at the site of the device but these problems usually disappear in a few days. Most people are walking around later the same day and resume normal activities again within 2-4 weeks.

The functioning and battery life of your device must be checked regularly at a cardiac clinic. Depending on the device implanted, a telemonitoring follow up  may be proposed to monitor your device, allowing rapid identification of heart rhythm disturbance and technical dysfunction and may improve your care and reduce the need for device clinic visits.

It is important that you let any doctors or dentists know that you have a CRT device before going for any procedures. Although most medical and dental procedures are unlikely to interfere with the functioning of your device, some may require precautionary measures that minimise any interference.

CRT devices may sometimes be detected by airport security machines, but the functioning of the device is rarely affected, so if you have a CRT device you should always inform the security personnel.

What patients need to know

This guide for patients from the European Society of Cardiology aims to provide an overview of the latest evidence-based recommendations for the diagnosis and treatment of heart failure.

In particular, it should help patients to understand the:

AN ANIMATED JOURNEY THROUGH HEART FAILURE

A series of 9 simple, captivating animations explaining heart failure and its treatment.

These narrated animations explain how a healthy heart works, what happens to it in heart failure and how various treatments work to improve your health.

How the normal heart works

What goes wrong in heart failure

How the heart and body compensate in heart failure

How a heart attack can cause heart failure

How abnormal heart valves can cause heart failure

How vasodilators work in heart failure

How diuretics work in heart failure

In this section you can watch, listen or read interviews with other people with heart failure and their caregivers.

Patient with an ICD

An LVAD as a bridge to transplantation

Challenges in making the diagnosis

Living with an LVAD

and share your own views and experiences with other patients, families and caregivers.

The heartfailurematters.org website was developed under the direction of the Heart Failure Association of the European Society of Cardiology (ESC). The ESC is a world leader in the discovery and dissemination of best practices in cardiovascular medicine. Our members and decision-makers are healthcare professionals who volunteer their time and expertise to represent professionals in the field of cardiology in Europe and beyond.

Back to top SCROLL DOWN

Our updated and improved website has just been launched with the latest information on heart failure for patients and caregivers.

Watch the video below to learn how to navigate the site and quickly access the information you need.